NEW YORK (June 24, 2021) - Empire State Realty Trust (NYSE: ESRT) announced today that the 10th annual Empire State Building Photo Contest will return on June 24, 2021. Photographers of all skill levels are invited to share their best images of and from the famous building for a chance to win the grand prize of $5,000 and a gift card for photo equipment with a retail value of $500. The second-place winner will receive a $1,500 check. In honor of the Empire State Building’s 90th anniversary, there will be 90 finalists in this year's contest.

Photographers have a chance to win in eight categories including:

To participate, entrants must submit their photos on www.esbphotocontest.com, or via a public Instagram or Twitter account using both #ESBPhotoContest21 and #contest hashtags. Each category winner will receive a $500 check.

Submissions must be entered by 11:59 p.m. ET on Aug. 19, 2021. After finalists are chosen, the public is invited to vote for the grand prize and second prize winners on Instagram and Twitter, and the category winners on www.esbphotocontest.com.

Entrants must be over the age of 18 and legal residents of the United States, excluding California. For official rules and additional information about the photo contest, please visit www.esbphotocontest.com. 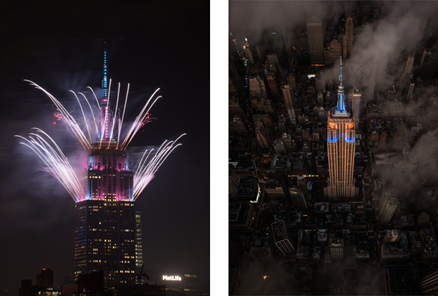