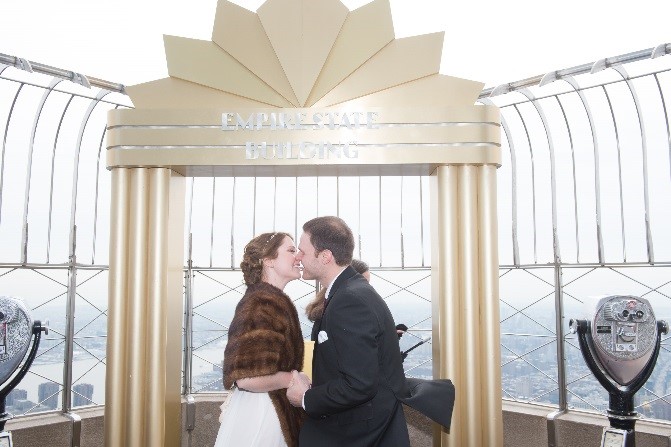 Since 1931, ESB’s world-renowned 86th Floor Observatory has been the site for countless on-screen romances which makes it the perfect backdrop for couples to share their love and exchange their vows. Valentine’s Day is the one day of the year on which select couples receive the chance of a lifetime to get married at the World’s Most Romantic Building. This year on February 14th, eleven couples will make their wedding dreams come true on the 24th anniversary of this special Valentine’s Day tradition.

ESB will host each wedding ceremony on the famed 86th floor Observatory throughout the day as follows:

Kleinfeld Bridal is the presenting sponsor of the Empire State Building 2018 Valentine’s Day Weddings. As the leader in bridal fashion, each bride will be gifted a wedding dress of their choice from its famous flagship location in New York City.

Additionally, all stateside couples will enjoy a one night stay at Grand Hyatt New York, an exclusive continental breakfast and prosecco toast at the Empire State Building’s own STATE Grill and Bar, a bridal bouquet and boutonniere from 1-800-Flowers.com®, and complimentary name-change from HitchSwitch.  One lucky couple will also win a honeymoon package to an all-inclusive Royalton Luxury Resort.

An Wang, the bride-to-be from China, also received roundtrip Air China tickets from Beijing to New York to get married to her significant other atop the world famous building.