The CW To Exclusively Stream The Special Event On The CW App and CWTV.COM; iHeartRadio Stations To Broadcast The Event on December 20 at 9pm ET/6pm PT

New York (Dec. 7, 2021) – Today, iHeartMedia and the Empire State Building(ESB) announced the “iHeartRadio Holiday Pop Up Party With Ed Sheeran,” an intimate live event to feature a five-song performance and exclusive interview, hosted by iHeartRadio on-air personalities Elvis Duran and Maxwell & Crystal at the world-famous Empire State Building on Dec. 8. In addition to songs from his recently released album and other fan favorites, Ed Sheeran will perform “Merry Christmas,” his new holiday song with Elton John, coupled with a special music-to-light show to premiere simultaneously atop the iconic building’s tower at 8 p.m.

Fans can tune into iHeartMedia New York’s Z100, 106.7 Lite FM and 103.5 KTU, also available on the iHeartRadio App, to listen to the song while they watch the festive light display. In addition, the entire “iHeartRadio Holiday Pop Up Party With Ed Sheeran” special will exclusively stream on The CW App and CWTV.com, and broadcast on iHeartMedia’s CHR and HOT AC radio stations nationwide on December 20 at 9 p.m. ET/6 p.m. PT.

“I’m thrilled to participate in this annual holiday tradition with Elton’s and my new song ‘Merry Christmas,” said Sheeran. “I’m looking forward to celebrating the start of this holiday season from atop the Empire State Building, wishing a happy Christmas to everyone in New York City and around the world.”

Fans can listen to iHeartMedia’s Z100, 106.7 Lite FM and 103.5 KTU or visit the stations’ websites for a chance to win a ticket to this very intimate show.

"Holidays in New York are always very special, but this year, even more so.  Ed and Elton’s new song is destined to become a Christmas classic. I can’t think of a better way to celebrate the season than partnering with Ed Sheeran, Empire State Building and The CW for a one-of-a-kind holiday pop up concert.” said Tom Poleman, President and Chief Programming Officer of Programming for iHeartMedia.

The festive music-to-light spectacular will feature thousands of LED lights at the top of the famous tower, choreographed by world-renowned lighting designer Marc Brickman and his Tactical Manouvre team. The light show set to “Merry Christmas” by Ed Sheeran featuring Elton John will debut on Dec. 8 and replay nightly from Dec. 20 through Dec. 25 timed to the 7 p.m. ET broadcast on iHeartMedia New York's Z100, 106.7 Lite FM, and 103.5 KTU and the station's Facebook pages. Viewers outside of the New York City area can tune in to watch the show live via Earthcam at https://www.esbnyc.com/earthcam-empire-state-building, and a video of the entire show will be posted on the Empire State Building’s YouTube channel (www.youtube.com/esbnyc) immediately following its debut on Dec. 20. The Empire State Building, which celebrates its 90th anniversary in 2021, is the New York City broadcasting home of iHeartMedia.

“The Empire State Building’s and iHeart’s annual gift to New York City are a holiday staple of New York City, a tradition accessible to all who live in and visit the greatest city in the world and available around the world on YouTube,” said Anthony E. Malkin, chairman, president, and CEO of ESRT. “This year, our annual Holiday Light show celebrates this fantastic duet by Ed Sheeran and Elton John.”

Over-the-top holiday decorations adorn the Empire State Building, from the festive window dressings and a towering Christmas tree in the Fifth Avenue Lobby to the holiday photo corner and menorah within the Observatory Experience. Visitors who pass through the Fifth Avenue Lobby from Monday through Friday will also be greeted by holiday tunes performed by professional pianists from 8 a.m. until 7 p.m.

To add to the holiday excitement, follow @EmpireStateBldg and @iHeartRadio on social media and use the hashtag #ESBUnwrapped.

Inc. (Nasdaq: IHRT) is the leading audio media company in America, reaching over 250 million people each month. It is number one in both broadcast and digital streaming radio as well as podcasting and audio ad tech and includes three business segments: The iHeartMedia Multiplatform Group; the iHeartMedia Digital Audio Group; and the Audio and Media Services Group. Visit iHeartMedia.com for more company information.

About the Empire State Building
The Empire State Building, "The World's Most Famous Building," owned by Empire State Realty Trust, Inc. (ESRT: NYSE), soars 1,454 feet above Midtown Manhattan from base to antenna. The $165 million reimagination of the Empire State Building Observatory Experience creates an all-new experience with a dedicated guest entrance, an interactive museum with nine galleries, and a redesigned 102nd Floor Observatory with floor-to-ceiling windows. The journey to the world-famous 86th Floor Observatory, the only 360-degree, open-air observatory with views of New York and beyond, orients visitors for their entire New York City experience and covers everything from the building's iconic history to its current place in pop-culture.  Learn more at www.esbnyc.com.  2021 is the 90th anniversary year of the Building which officially opened on May 1, 1931. Declared "America's Favorite Building" by the American Institute of Architects, as well as the world's most popular travel destination by Uber and the #1 New York City attraction by Lonely Planet it welcomes more than 4 million annual visitors from around the world.

Since 2011, the building has been fully powered by renewable wind electricity, and its many floors primarily house a diverse array of office tenants such as LinkedIn, Shutterstock, and Global Brands Group, as well as retail options like STATE Grill and Bar, Tacombi, and Starbucks. For more information and Observatory Experience tickets visit esbnyc.com or follow the building's Facebook, Twitter, Instagram, Weibo, YouTube, or TikTok.

Ed Sheeran is an era-defining artist. From record-breaking sales across his recorded music and live performances, and a plethora of award wins to his name, the British singer-songwriter is the boundless talent behind some of the biggest songs in history.  The 4x GRAMMY award winner has consistently 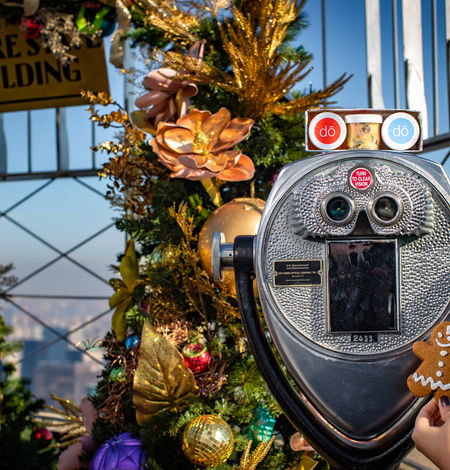 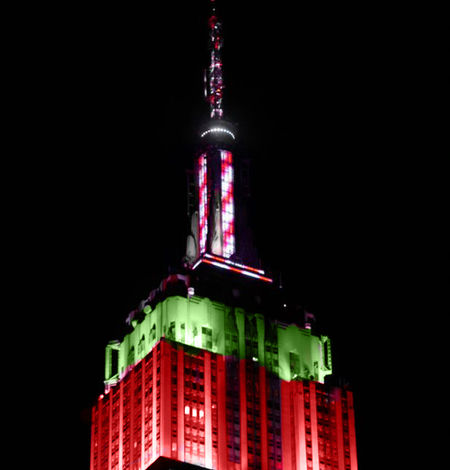 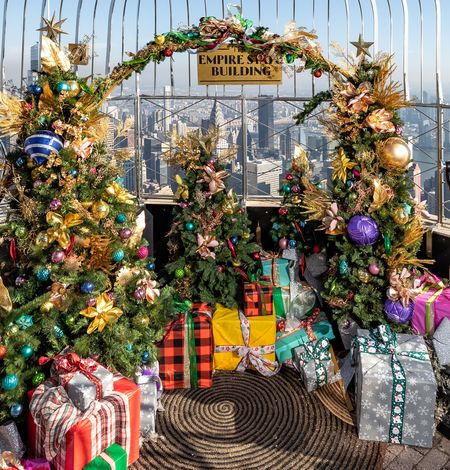