“New York City comes alive during this time of the year, and the Empire State Building is a magical and integral part of that transformation from the tip of our tower lights to our holiday Fifth Avenue lobby windows,” said Anthony E. Malkin, Chairman and CEO of Empire State Realty Trust. “Observatory visitors look forward to our annual festivities, and we can’t wait to share the holiday cheer this season.” 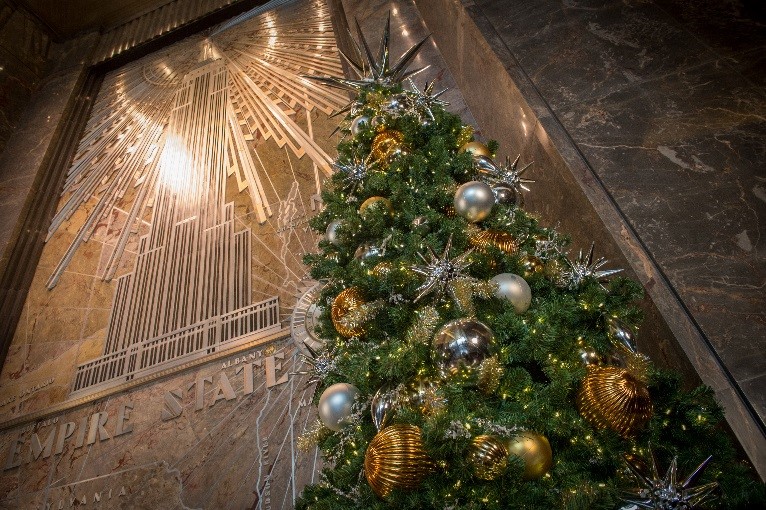 You never know who you may run into during a visit to ESB. Throughout the months of November and December, the building will welcome notable celebrity guests to its world-famous 86th floor Observatory to enjoy the 360-degree views and say hello to fans. In past years the building has welcomed music legend Mariah Carey and Grammy Award-winning a capella group Pentatonix. This year, pop icon Gwen Stefani stopped by to light the tower lights and kick off the holiday season – announcing that her song “You Make It Feel Like Christmas” will be used for ESB’s holiday light show.

On November 16, the Radio City Rockettes “unwrapped” ESB’s custom Fifth Avenue window display, designed by Mark Stephen Experiential Agency. The new bespoke windows feature models of ESB made from crystal and gingerbread within everything from wintry landscapes to festive nutcrackers. Decorations in shades of gold, bronze, and silver, highlighting the global icon's Art Deco architecture will adorn the building’s lobby from November 16 through January 5.

From November 27 to December 29, Monday through Friday, a pianist will perform in ESB’s iconic Fifth Avenue lobby. Guests are invited to listen to holiday classics and a collection of seasonal favorites during the hours of 8-11 a.m., 12-3 p.m., and 4-7 p.m.