New York, NY (December16, 2019)– Empire State Realty Trust, Inc. (NYSE: ESRT) and iHeartMedia today announced that the Empire State Building (ESB) will celebrate the 25th anniversary of global superstar Mariah Carey’s iconic song, “All I Want for Christmas Is You” with a music-to-light show this holiday season. The show, designed by renowned lighting artist Marc Brickman, will premiere on December 19, and will be synced live at 8p.m. ET on iHeartMediaNew York’s Z100, Power 105.1, 103.5 KTUand 106.7 Lite fm. Viewers outside of New York City can tune in to watch the show live via Earthcam at https://www.esbnyc.com/earthcam-empire-state-building. A video of the entire show will be posted on the Empire State Building’s YouTube channel immediately following the premiere on the 19th for fans around the world to enjoy.To continue celebrating the festive season, the synchronized light show will broadcast on iHeartMedia New York’s Z100 and Lite fm every night at 8 p.m. ET through December 25. 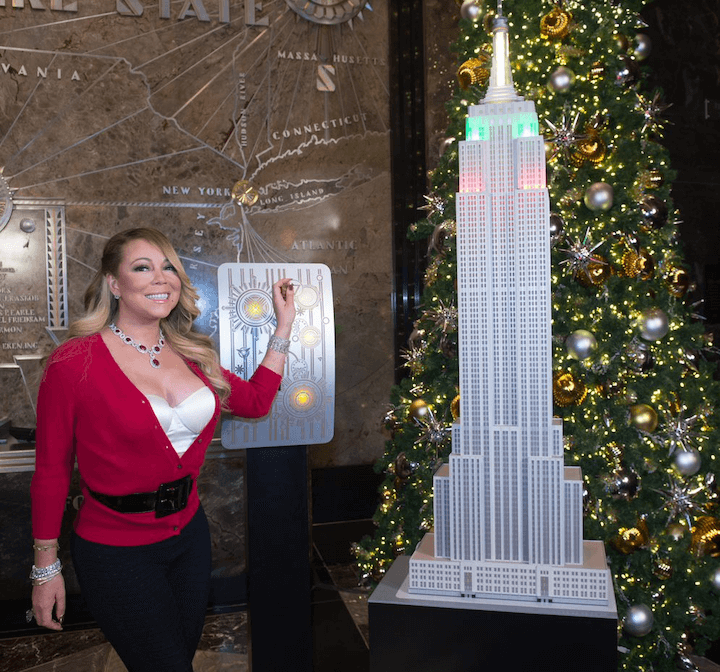 “Mariah Carey has long been a friend of the Empire State Building, and we are excited to celebrate this special anniversary of her iconic holiday hit, “All I Want For Christmas Is You” with music-to-light show at the iconic Empire State Building,” said Anthony E. Malkin, Chairman and CEO of Empire State Realty Trust. “Our annual music-to-light shows bring holiday cheer to those around the globe, and how could they not when we get to partner with the Queen of Christmas herself?”

“For decades, Mariah Carey’s “All I want For Christmas,” has proven to be a holiday staple for iHeartRadio listeners nationwide,” said Tom Poleman, Chief Programming Officer for iHeartMedia. “What better way to celebrate the 25th anniversary of this iconic song than with a festive synchronized light show at New York’s most iconic building this season.”

This year, in addition to watching the light show from many vantage points around New York City and the Tri-State area, fans nationwide can also tune in to The CW on December 19 at 8pm EST/PST for a sneak peek during iHeartRadio’s Jingle Ball television special.

As part of ESB’s annual #ESBUnwrapped celebration, the annual holiday light show is a beloved tradition along with classic holiday decorations in the Art Deco lobby, museum-quality displays in the Fifth Avenue lobby windows and special holiday touches throughout the newly-completed Empire State Building Observatory Experience. Visitors to the World’s Most Famous Building during the holiday season also experience surprise appearances by celebrities, a pianist playing a selection of holiday favorites, and another year of festive light shows.

To contribute to the holiday excitement, use the hashtag #ESBUnwrapped on social media channels.

iHeartMedia New York owns and operates WHTZ-FM, WKTU-FM, WAXQ-FM, WWPR-FM, WLTW-FM and WOR-AM. iHeartMedia is the number one audio company in the United States, reaching nine out of 10 Americans every month – and with its quarter of a billion monthly listeners, has a greater reach than any other media company in the U.S. The company’s leadership position in audio extends across multiple platforms including more than 850 live broadcast stations; streaming music, radio and on demand via its iHeartRadio digital service available across more than 250 platforms and 2,000 devices including smart speakers, digital auto dashes, tablets, wearables, smartphones, virtual assistants, TVs and gaming consoles; through its influencers; social; branded iconic live music events; and podcasts as the #1 commercial podcast publisher globally. iHeartMedia also leads the audio industry in analytics and attribution technology for its marketing partners, using data from its massive consumer base. iHeartMedia is a division of iHeartMedia, Inc. (NASDAQ: IHRT). Visit iHeartMedia.com for more company information.

MARIAH CAREY is the best-selling female artist of all time with more than 200 million albums sold to date and 18 Billboard Hot 100 #1 singles (17 self-penned), more than any solo artist in history. Mariah is a singer/songwriter/producer recognized with multiple Grammy Awards, numerous American Music Awards, Billboard’s “Top Female Artist of All Time”, Billboard's "Artist of the Decade" Award, Billboard’s “Icon Award,” the World Music Award for "World's Best Selling Female Artist of the Millennium," and BMI's "Icon Award" for her outstanding achievements in songwriting, to name a few – with her distinct five-octave vocal range, prolific songwriting, and producing talent, Mariah is truly the template of the modern pop performance. The icon holds the Guinness World Record for highest-charting holiday (Christmas/New Year) song on Billboard’s Hot 100 by a solo artist, as well as most streamed track on Spotify in 24 hours. Mariah's ongoing impact has transcended the music industry to leave an indelible imprint upon the world at large. She made her entry into the world of independent film with her landmark performance in "WiseGirls" starring alongside Academy Award winner Mira Sorvino and Melora Walters. In 2009, Mariah was recognized with the Breakthrough Performance Award at the Palm Spring International Film Festival for her critically acclaimed role in Lee Daniels' "Precious." Mariah went on to appear in Daniels' stellar ensemble piece "The Butler" (2013). A Congressional Award recipient, Mariah has generously donated her time and energy to a range of philanthropic causes near to her heart including Save the Music, the Make-A-Wish Foundation, World Hunger Relief, and the Elton John AIDS Foundation, among many others. A tremendous supporter of children's charities, both domestic and international, Mariah founded Camp Mariah in partnership with the Fresh Air Fund, a retreat for inner city children to explore career development. Mariah is represented by Roc Nation, CAA and Imprint PR. www.mariahcarey.com